A team of three students from the University of Lagos (UNILAG) has won the Hackathon4Justice competition organised by the United Nations Office on Drugs and Crime (UNODC) in partnership with Facebook and AfricaTeenGeeks.

The students were mentored by were Iyinoluwa Samuel Aboyeji, Co-founder of Nigerian startup Andela and founder of Flutterwave and a number of Software Engineers from Facebook. 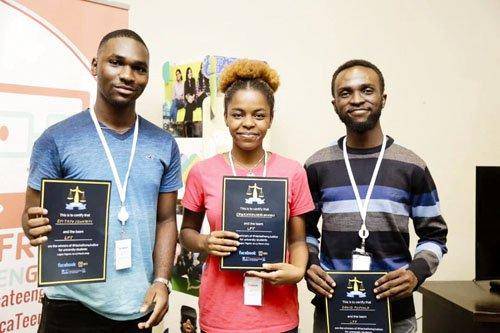 The students were challenged to employ technology to solve problems relating to achieving the rule of law in the areas of corruption, integrity and ethics; crime prevention and criminal justice; organized crime; human trafficking and terrorism and violent extremism after a 29-hour coding marathon.

The team of three, made up of David Popoola, Eyitayo Ogunbiyi and Chukwudumebi Onwuli beat 47 other students from nine institutions shortlisted for the final at the Four Points by Sheraton Hotel in Lagos last weekend.

They winning team developed a software, ‘Let’s Fight Trafficking’ (TFL), to unmask traffickers.  It features an e-learning planning platform on human trafficking; a facial recognition system that matches feed from webcams and other images to determine existing case with similar images in the database; a portal for victim’s close friends to file reports about trafficking in their area and a heat map, generated from report data to let users know where trafficking is most prevalent and take preventive measures.

The winners have secured tickets to the Global Hackathon for Justice event to hold at the Google Headquarters in Silicon Valley in August, where they will participate as mentors.

A team of four students from the Ladoke Akintola University of Technology (LAUTECH), Ogbomoso came second for designing a mobile application they call ‘Athena’ that allows people to report crime, emergencies and detects location of users and composes a report.  It also helps users learn about their rights and provides anonymity for whistle blowers.

Commenting on their win, David said “So many thanks to the organisers, mentors and sponsors at the Hackathon4Justice for their time, attention and the opportunity to be a part of the event.  The hackathon gave us the opportunity to test our skills and learn even more.  This is not the end.  We will keep the same energy and continue providing solutions to the problems of our world.”